When we recall rooted tradition in Indian fashion industry we come across one gentleman in the entire fashion kingdom and that is Sabyasachi Mukherjee… Kolkata the root city of Sabyasachi, he got the fashion taste and love for the entire work from here.
His main work originates from the traditional clothes and handwork with patches and sequences. The legacy of fashion is carried on by and will be carried on by this Bengali man all through the fashion industry. he is the perfect man with the creative bend of mind and with the deep sense of intellect..

Sabyasachi Mukerjee arrived to the fashion industry a decade ago. ‘ Personalised imperfection of the human hand’is the main mantra of Sabyasachi Mukherjeee. Deserts, gypsies, prostitutes, antique textiles and cultural traditions of his home town, Kolkata have been a lifelong inspiration for this designer who believes that clothes should just be an extension of one’s intellect. He uses unusual fabrics, texturing and detailing, ‘fusion’ of styles ‘patch-worked’ with gorgeous embellishments in a vibrant eclectic colour palette to make the feeling of going back to the ancient and medieval ages and giving the designs and the women wearing an ethnic look.. He describes his own collections as ‘an International styling with an Indian soul’. He has the caliber to design exquisite embroideries and prints to contemporary designs. He energetically promotes Indian fashion incorporating Indian heritage. He gives importance to the Indian textiles, handicrafts and handlooms. Along with the designing of the look of the women sabya also glorifies nation all over the world. He has a bohemian creation but still rooted to tradition. 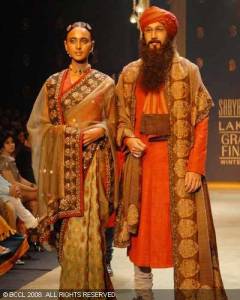 Sabya’s fashion hitherto has been known for dressing up elegantly the bride on the D-day. Stunning lehengas, beautiful cholis, breathtaking dupattas, superb kurtas, salwars, churidars, amazing saris with the most outstanding embroidery and prints inspired by the handlooms of kolkata and west Bengal are the major works of Sabyasachi. Velvet, silk,organza,brocade,chiffon, and georgette were the basis of the fabulous collection, in myriad muted colours. His bridal collection is about going back to the root and dress up an Indian bride with an Indian feel.

He participated in several fashion competition and even in Lakme Fashion Week every year. In one such LFW he gave her models an ethenic look. The mix of fabrics, prints and a multitude of colours is Sabyasachis expertise and he mixed, matched, contrasted and fused everything possible. Silhouettes for the kurtas revived the vintage glamour of the Mughal era as hemlines nearly kissed the floor or rose to knee level. Prints were pure unadulterated ethic while fabrics ranged from cotton, silk, chiffon, georgette, brocades to lush velvets which were blended together for different segments of each garment. The final creation — a black multi-paneled patterned silk lehenga with exquisite glittering embroidery worn with a glittering blouse and odhani was the ultimate bridal offering as singer Sukhvinder Singh ended the show on a high note.

Coming to bollywood he started off his work with the creation of Rani Mukherjee’s garments in the movie “Black” and was highly acclaimed. He also created suits for movies like “Babul”, “Laga Cunri Pe Daag”, and many more to come.

Among many awards, he is a recipient of the “Most Outstanding Designer of India” award by the Times of India. Sabyasachi won the Femina British Council Most Outstanding Young Designer of India award in 2001, which earned him a trip to London to intern with the Salisbury-based Fashion Designer Georgina Von Etzdorf. Sabyasachi went on to win the 2003 Grand Winner award at Mercedes New Asia fashion week in Singapore. Sabyasachi went global with the 2004 Kaula Lampur Fashion week. Sabyasachi is the only Indian to have been invited to the Milan Fashion Week, Italy (in 2004) to showcase his creations.
Sabyasachi Mukherjee has created his designs under the banner name “sabyasachi”. He has verity of showrooms spread across different cities like kolkata, Mumbai,Chennai, Bangalore, ahmedabad. and even abroad in London,Saudi Arabia, USA,HongKong, Italy, Germany, Russia.