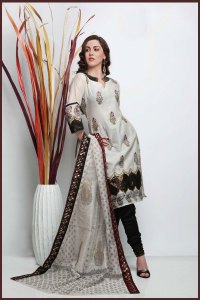 Indian traditional dress is the most elegant dress in the wardrobe of every woman. If one can carry the attire neatly and nicely it is the best outfit. Among the dresses salwar-kameez is the most commonly used garments by the Indians. It is easily wearable, specially for the loosely stitched pajama. A shalwar kameez is incomplete without a dupatta.it is called the salwar dupatta. Dupatta is a long rectangular piece of cloth, stitched on all four sides. Its length varies from 2-3 m.. Ideally it is worn by the women over the head while offering prayers. This covering denotes the respects of the Indian ladies towards their elders or almighty.

Apart from being traditional dupatta has also entered the fashion world. It is now more of a trend than tradition. It can almost be wrapped around with every outfit. Dupatta adds grace and dignity to the dress you wearing specially with Indian attire. The first thought that come across the mind when we talk about dupatta is the Rajasthani dupatta also known as lal dupatta. Dupatta is also known as odhini. It is known as churni in gujrat. Dupatta comes in various forms and vibrant colours. Red, blue, orange, green, white, and many more. Cotton, silk,, jute, bandni, tasar, etc are the various material of dupatta.

Indian salwar dupatta is an attractive accessory that looks graceful and breaks the monotony of the dress. A plain silken or cotton salwar kameez dupatta set ensemble can look simple an elegant when worn with a heavily embroidered or sequined indian dupatta decorated with a beautiful border. Sequences, doubled dyed, mirror work, patches, handwork, stitches are some of the work done in the dupattas to give it a new look. A new dimention, something different from the monotonous forms of dupatta.

Drapes in dupatta can comes as over the head style, one side shoulder dupatta, the traditional V shape drape or the bandana style that combines the hair styling and casual comfort. The dupatta of the sixties was the best way enhanced to suit the style of the tight fitting churidar-kurta style that also was seen in line tunics. Another style in fashion now a day is to take it round the neck and put it over the neck where one half rest on front and the other half on the back. Another styling is to go for a dupatta that is a total contrast of the image of the main dress. This creates the distinction between the dress and the duaptta. The dupatta is also given separate attention. Just a change of dupatta or the manner in which it is drape adds new dimensions to the outfit. The stole is another modern element which can also be used over tight jeans and a kurta top. This is perfect for evening outs or night parties. There are styles in net, plain silks or some even resemble a long scarf.

Indian bride is incomplete without the dupatta, whether wearing with the sari of the traditional salwar-kameez. Generally it is termed as the “veil” a semi transparent cloth. It is mainly of golden colour with chumki work or red with golden border along with sequences.. it is put around the head and tied up with the bun of the hair. It is kind of similar with the salwar-kameez of the bride.