The wide diversity in Bollywood Sarees has always caught the fancy of its audience, as Bollywood surely knows how to get the proper blend of quality fabric with quality designs. To breathe life into the gorgeous outfits, our celebrities from the industry are ever ready to carry their sarees in the most exotic styles leaving the audience demanding for more.

Among the wide array of such sarees worn in certain films, here is our pick of the five most trend setting saree – sequences of Bollywood, which you cannot forget: 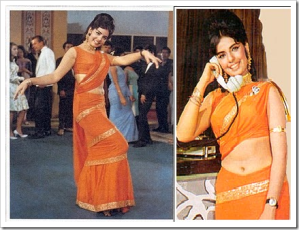 In the late 60’s Mumtaz was seen in a Sharara Saree in the film “Bramhachari,” which later became so popular that till date this type of saree is known to be Mumtaz Sarees. In spite of not playing the lead character in this film, Mumtaz in the song “Aaj kal tere mere pyaar ke charchey” was able to bask in the limelight due to her sparkling and glittering bright orange saree, draped unconventionally like a sharara, twice around the hip and the knee. With a short pallu, this saree gave a slim effect to Mumtaz, and it was neatly pleated with just 1 pin to hold the saree over the shoulder. This uber cool style became a hugely popular and encouraged experimentation with Sarees. 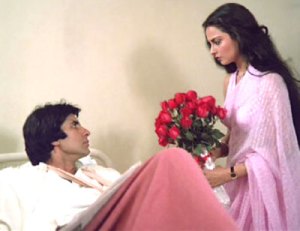 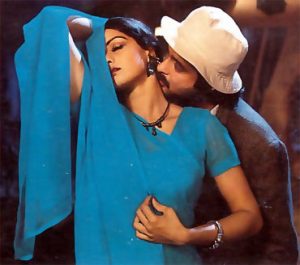 Sri Devi defined in the song “Kaatey nahin Kattey, yeh din..” how a simple blue chiffon saree could become the ultimate symbol of sultriness. In a bid to entice an invisible Mr. India, Sri Devi made it sure that the entire Indian male race to go spellbound. Probably the most sensuous rain dance was made complete due to the blue chiffon saree, which became a favorite with celebrities for award functions, where they dressed in embroidered yet simple Chiffon sarees for the “Ommph” factor. 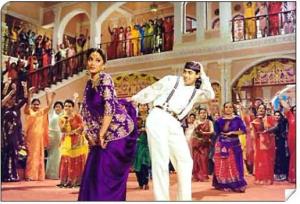 The unforgettable Madhuri Dixit in a crystal studded purple-blue satin sari, dancing to “Didi tera dewar” of “Hum Apke Hain Kaun” made young girls ardently creating replicas of the outfit throughout India. According to a fashion magazine, this design of saree remained popular as the largest selling design. Not only were the girls floored with this look, but the boys were also left drooling with the back open choli of Madhuri. 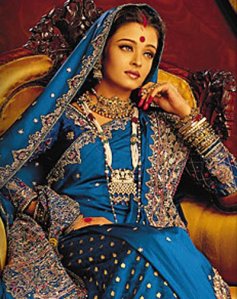 Devdas’s Paro has been given an immortal look in this film with Aishwarya pensively standing in a heavily embroidered blue Banarasi Saree with the typical Bengali “chabi guchho” (Key Ring) tugged at the end of the saree, long sleeved saree blouse with intricate work done on the neckline and on the sleeves. Along with the profoundly decked saree, Aishwarya harmonized it with authentic traditional jewelry to complete the look.