Did you see that Manish Malhotra Saree Alia Bhatt flaunted in 2 states? What about Deepika Padukone’s south Indian look in the colorful half sarees? There’s no shame in believing that our style is primarily influenced by the cinema – Hollywood and Bollywood. And, its only times like festivals, occasions, and weddings that we focus more on what’s “in” this season. More often than not, a discussion which starts with ‘what to wear at the wedding’ or ‘what to wear on Diwali’ ends with ‘how about something like that white and blue lehenga Priyanka wore at IIFA or maybe the Bengali sarees she wore in her movie Gunday?’

To save you time and energy from turning Google upside down for the latest trends, Team Sareez has decided to bring to you the Saree and Suit trends made popular by our tinsel town celebrities in 2014. Take a look:

One woman who irrespective of what she wears can dazzle the screen with her 440V smile is none other than Bollywood’s one of the most gorgeous and classy women – Madhuri Dixit Nene. Millions of fans must have been heartbroken when Madhuri disappeared from the industry post her marriage to US based Cardiovascular Surgeon Dr. Shriram Madhav Nene. After her comeback in Aaja Nachle in 2007, Madhuri featured in several other movies and reality shows. But one of her recent movies Dedh Ishqiya (sequel to Vidya Balan’s Ishqiya) saw her in a total different avatar. In this movie, she is seen flaunting typically traditional ensembles. Above is a still shot of her from the song “Hamari Atariya” where Madhuri is seen wearing an off white/golden lawn suit with self-design throughout the body and intricate golden/golden-ish yellow borders. This type of a suit is perfect to be worn during mehendi/sangeet ceremonies or during Puja or other occasions. 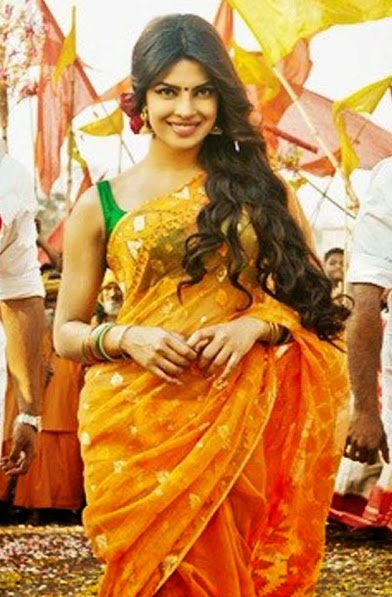 Often known as Bollywood’s style icon, Priyanka Chopra has emerged as a true icon for flawless style and interesting hairdos for quite a few years now. Who can forget her metallic saree and bikini blouse in “Desi Girl” from the movie Dostana. She has time and again managed to truly surprise her fans and followers with her experimental dresses and style statements – both western and traditional. This valentine’s day Priyanka yet again rocked the silver screen with her traditional Bengali look in Gunday against Bollywood’s newest hotties Ranveer Singh and Arjun Kapoor. The movie saw her wearing many light weight cotton/Taant sarees famous in and around West Bengal. But, what caught our eye is her dark orange Taant saree paired with green sleeveless blouse that made her look like a real Bong beauty. Durga Puja is round the corner so we hope this gives you all bong beauties a little hint on what to wear this puja.

Yeah that’s right! We know this one would have definitely surprised you, as you as well as we have read some of those quirky jokes about Alia Bhatt’s IQ level. But let’s just say it has nothing to do with how she dresses herself up. Though her IQ level is beyond our comment zone but designers have definitely done a great job in dressing her up in bright and vibrant sarees and suits. We have already mentioned the colorful Manish Malhotra ensemble she proudly wore in 2 States. Her second look which she adorned in Humpty Sharma Ki Dulhaniya (Yes! It’s a movie) is also equally bright and colorful but this movie sees her dressed up in typical Punjabi attires – short kurti, Patiala salwar, and a colorful embellished jacket. 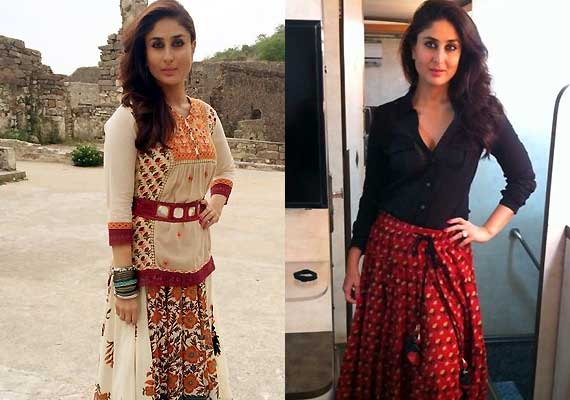 We promise we haven’t seen this movie before you all take us for a crazy lot but as any other fashion geek, Kareena aka Bebo’s urban-ethnic wardrobe did catch our eye. For most part of the movie, Bebo is seen flaunting Ritu Kumar creations. Now, accept it or not but Bebo has made quite a few statements in the past with her looks in Bollywood movies such as Jab We Met, Bodyguard, and Ra-one. She made long t-shirts and patialas a rage amongst college girls and don’t even get us started on how many women wore that Red saree with the ditto blouse after Ra-one. Singham Returns sees Bebo in long ethnic skirts with latkans and matching tops.

Though there have been quite a few fashion statements this year but since we are concentrating on only Indian clothes, we have brought to you our picks from the Bollywood Diary. Adding to the above list, don’t forget to check the recent collections of Lakme Fashion Week. Also, if you are a bride-to-be, we suggest you follow the Indian Bridal Week ensembles and draw inspiration.

Don’t forget to tell us about your favorite look of 2014.

Until then, keep smiling and stay stylish!