Ask an Indian woman what her chosen comfort wear is, and she will mostly likely say “salwar kameez”. An Indian salwar kameez is the go-to outfit for women here. From market to office, from shopping to wedding, salwar suits rock. For different places and events, we choose from a range of salwar kameez designs, colours and fabrics. But who knew one could fight in an Indian salwar kameez, as well? We didn’t, until Kavita Devi showed us how! 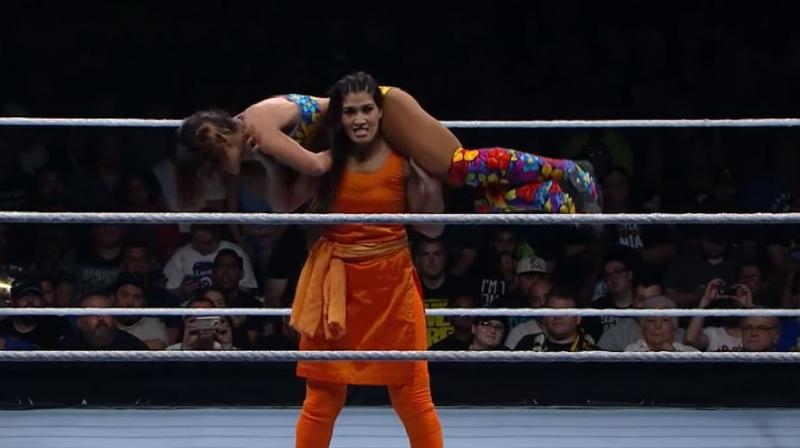 Former Haryana police officer Kavita Devi was a Mixed Martial Arts (MMA) champion, and she became the first Indian woman to step inside the ring of WWE, after getting included in the Mae Young Classic tournament. She was seen fighting in an event by the Continental Wrestling Entertainment which is the promotion and training school founded by The Great Khali, the former Indian WWE champion and one of Kavita’s idols. And, she emerged in her own style – wearing a salwar suit. It was a simple salwar suit design in saffron, and she had her dupatta securely tied around the waist, presenting a powerful image of a woman who means business.

A video of Kavita went viral, showing her take on Kiwi professional wrestler Cheree Crowley in a suit. And even though she couldn’t win, WWE Talent Development Vice President praised Devi’s powerful display at 2017 WWE Dubai tryout. Crowley called Devi athletic and extremely strong, and appreciated her strong grip on the fundamentals of sports entertainment.

So, do we celebrate Kavita’s effort to hold on to traditions, or the presence of the Indian slawar kameez on a stage where women go with jazzy outfits? Many are happy that she chose not to show skin. But, the fact is, if a woman a wrestling ring wears clothes that allow her skin to breathe, without caring about forced ideas of ‘modest dressing”, it’s her choice that we must respect. Inside the ring, it’s all about comfort. And, we should appreciate Kavita’s decision to be strong enough to wear something in which she felt comfortable and to concentrate on what she does best wrestling.

Kavita chose that same comfort. And, in doing so, she did many things. She broke stereotypes in one go. She showed that one can wear whatever she wants, no matter what the world says, and proved that clothes have nothing to do with profession. Kavita showed orthodox families that they can allow their women to choose the world stage without worrying about clothes. She made India visible on an international stage. And, she showed the world of wrestling that a woman in an Indian salwar kameez is a force to reckon with.